A Standardised European Emergency Card for Patients with Hypoparathyroidism

Thanks to a grant from Takeda, ESE are able to offer printed emergency cards to 15 national societies up to a maximum of 2000 cards per society.

Please complete the form found here, to detail your interest.

Once the form has been completed the following steps will be taken:

2. ESE request the applicant check any local regulations around the production and use of emergency cards.

3. ESE will organise production and printing of the emergency cards, and distribute these to the detailed address.

The Hypoparathyroidism emergency card will follow a similar template to previous cards produced by ESE, and those in circulation in general.  The card will have a similar template as the example below, one side with information in English, the other side with text in the national language. The card is 54 x 85mm and has a plastic cover. To emphasise that ESE stands behind the card 'European Society of Endocrinology' is printed at the bottom of the international side. 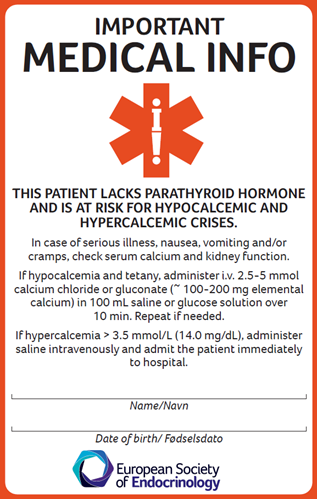 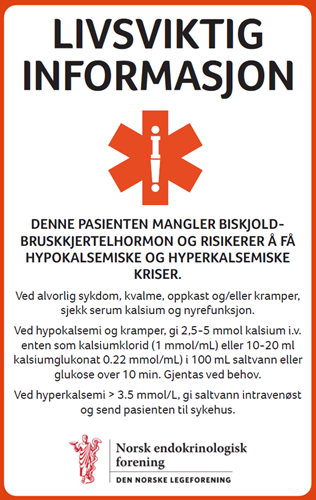 The development and distribution of ESE hypoparathyroidism emergency cards is kindly supported by Takeda.

Background – Assessing the need for an Emergency Card

A study was undertaken to assess the need for an emergency card in hypoparathyroidism, initially published in November 2018 and reviewed in April 2019:

This study encompassed a postal survey amongst Norwegian and Swedish patients with chronic hypoparathyroidism of all causes. Altogether 455 invitations were sent (333 from Norway and 122 from Sweden).

The results overwhelmingly showed that an emergency card would be of great benefit. 74% of patients responded (253 from Norway and 83 from Sweden). Overall, 44% and 16% had been hospitalized at least once for hypo‐ or hypercalcemia, respectively. 87% felt that an emergency card would be highly needed or useful. Amongst those hospitalized for hypocalcemia, 95% felt a card was needed compared to 90% amongst those hospitalized for hypercalcemia.

ESE conducted a needs assessment to understand how many European countries would value an emergency card for hypoparathyroidism and the approximate number of cards they would anticipate. A survey around the perceived need for an emergency card and the potential interest was distributed to all the National Societies, members of the ESE Council of Affiliated Societies (ECAS) with ESE. The initial results of this survey were very promising.

Of all the respondents 93% said they would be interested in implementing a standardised European emergency card for hypoparathyroidism in their country.