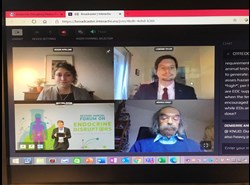 As part of the EU’s ambition to create a toxin-free environment for its citizens, the European Commission held the second forum on endocrine disruptors on 17-18 December. The agenda included a debate on the recently adopted and ESE welcomed “EU Chemical Strategy for Sustainability” and presented the outcomes from the “Fitness Check on Endocrine Disruptors”.

Overall, ESE was pleased to see the European Commission and Member State representatives recognise the severe impact endocrine disruptors have on human and animal health and the urgency to act.

An ESE representative was invited to share the views on behalf of the European endocrine community. Prof Josef Köhrle, Chair of the ESE Endocrine-Disrupting Chemicals (EDC) Working Group, was part of a general stakeholder session at the end of the conference, with industry and NGO representatives. The session discussed the conference outcomes and the next steps to address the continuing high prevalence of endocrine disruptors in consumer products and the wider environment.

Prof Köhrle stressed that the understanding of hormones and their function inside the human body is not always fully understood by most decision makers and is not sufficiently taken into account by European regulators and scientific bodies, such as the European Food Safety Authority. He called for more inclusion of endocrine perspectives in future decisions, at the EU level, around endocrine disruptors. For example, in the context of the implementation of the recently adopted European Green Deal.

In 2020, ESE was very active in Brussels on EDCs via the ESE EDC Working Group. ESE, together with the ESE Council of Affiliated Societies (ECAS), represent the VOICE for ENDOCRINOLOGY in Brussels, and our aim is to ensure that your concerns and expertise are considered when new policies that affect the care of endocrine patients are developed. To find out more on ESE’s advocacy work on EDCs and other initiatives ESE is undertaking in the EU policy arena, join the ESE Advocacy Representation Scheme (EARS) Community. The EARS Community helps ESE to fully represent the collective demands of more than 22 500 endocrine healthcare professionals and researchers across Europe, as well as the patients they care for – we would be delighted if you join us in these efforts!