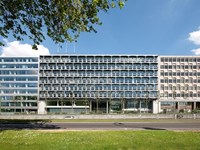 We are delighted to announce that we have opened an office in Brussels. The office is located on the Avenue des Arts, next to the European Parliament. The office is ideally placed within the heart of the EU and will provide many opportunities for ESE to grow its presence and activities within Brussels.

ESE President, Andrea Giustina comments, “This is a dream that comes to reality and is the first great achievement of my term as President. Symbolically, this represents the centrality of ESE for European endocrinology. This office will practically become the hub of the growing level of ESE activity – as global advocate for our discipline – and will provide a central meeting place for ESE’s Executive Committee, committees and working groups. It is a giant step for ESE’s future, and that of endocrinology, to have a base in the political capital of Europe. The establishment of this centre is a physical demonstration of ESE’s ambitions to defend endocrinology and influence policies, which impact endocrine conditions, by being at the centre of European politics. We will keep you updated as the office becomes further established and look forward to welcoming you there in the future!"

For the time being, and for membership and administration enquiries, please continue to contact the Society using the usual contact details.